Akinori Shigemi: CEO of Youmemiru, developing children’s ability to play an active role in society through robot production and programming. 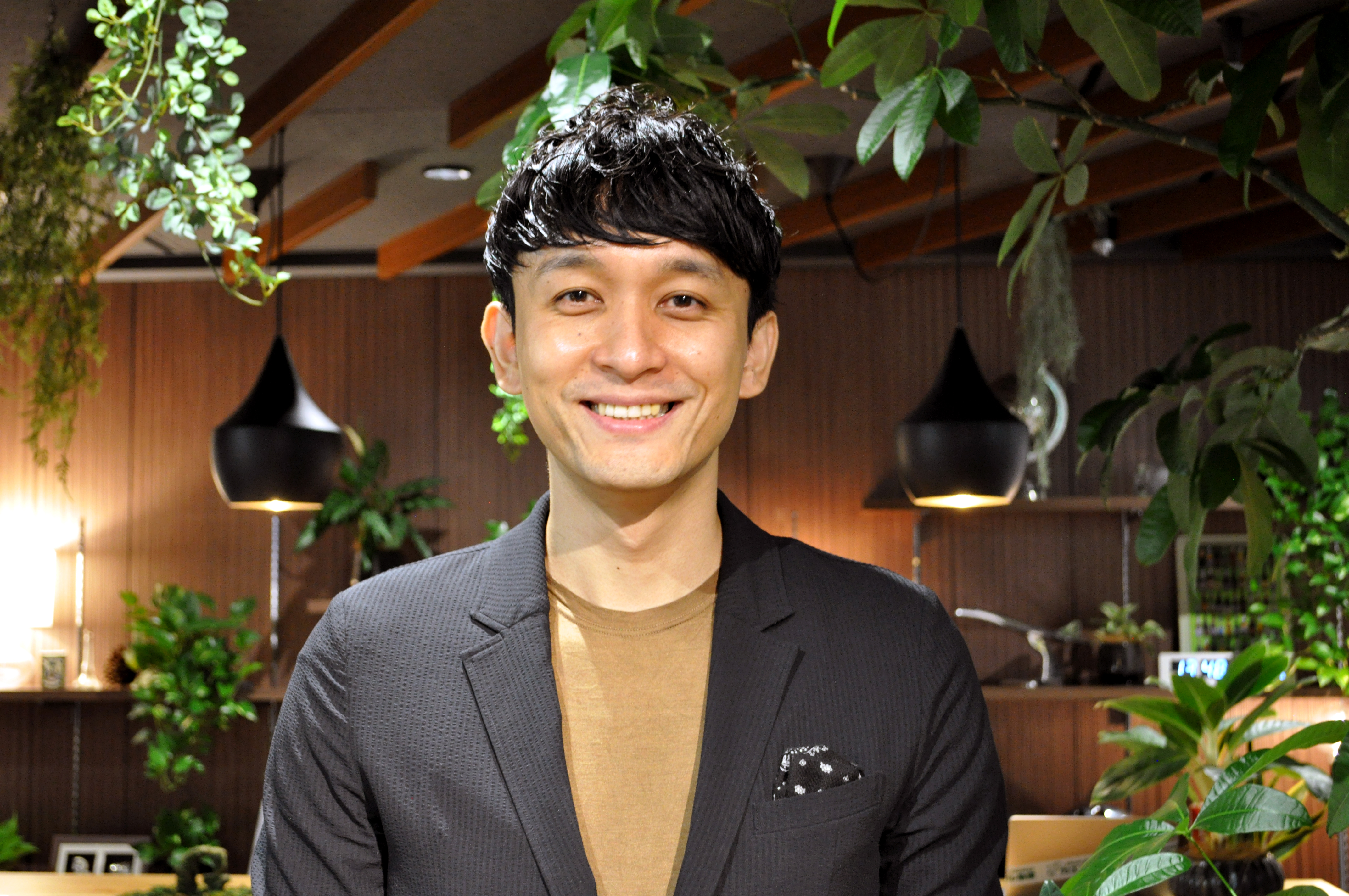 Q: Please tell us a little about Youmemiru.

We develop our own content for our educational platform for children, which is based on the educational philosophy of “learning what you love, and using it to contribute to society.”

One of our main projects is Robodan, a programming course aimed at children ages 5-6 (children in the final years of kindergarten or nursery school) up to middle school students.

Our curriculum is unique in that our students begin with something they like—making something, making it move, having fun—and the program also ties in to the class learning credits at schools.

As your level improves, you can also participate in ROBOCON (a robotics contest).
We’ve produced national champions, and we’ve gone to international competitions for two years in a row. Last November we went to a competition in Hungary, and we’ve also paid courtesy calls to the governor of Osaka Prefecture.

Our aim is to create an educational system that connects to children’s studies, and to their future careers by digging deeper into the things that children like, and to that end, we’ve opened 120 classrooms in Japan and overseas. We already have classrooms overseas in Hong Kong, Thailand, Vietnam, and Germany, and we’re going to expand into Turkey in the fall of 2020.

In terms of programming languages, we’re teaching Python so that students can begin learning in elementary school, but we start out with a visual language. We have them connect blocks together to learn the basics of programming, and we switch to having them use real programming languages along the way.
Emotion is what compels people, and especially when it comes to children in the early stages of learning something, if they don’t feel drawn to it, they won’t continue, so we’re very particular about students being able to feel like, “I like this!”

Q: You’re very concerned about keeping the kids’ interest.
You started your business as an after-school activity, but was there a reason for that, as well?

Yes, there is a reason we started with after-school care.
The biggest is that before I started my own business I was working at a management consulting company. I was in charge of supporting small- and mid-sized businesses there, and I came to result that though there were many people who could do what they were told, there were very few people who could actually create their own businesses.

I think the reason for this is really that in-school education tends to place importance on working out what you’ve learned within a time limit, and I think that has a large effect.

The future of coming eras is uncertain, and it’s a time in which people are judged on the value of what they can produce, so I started to feel that our current in-school education isn’t enough. Cram school education also ultimately pursues short-term goals like school studies and exam prep, so I looked for a different approach.

I decided that the goal wasn’t in school, but out in the workforce, in society, and if I started an after-school program, I would see the children every weekday, and I’d be much better able to see their progress than I would in a cram school that meets just once or twice a week. I wanted to spend a lot of time with the kids and create an educational program that would change their lives, so I started with an after-school program. 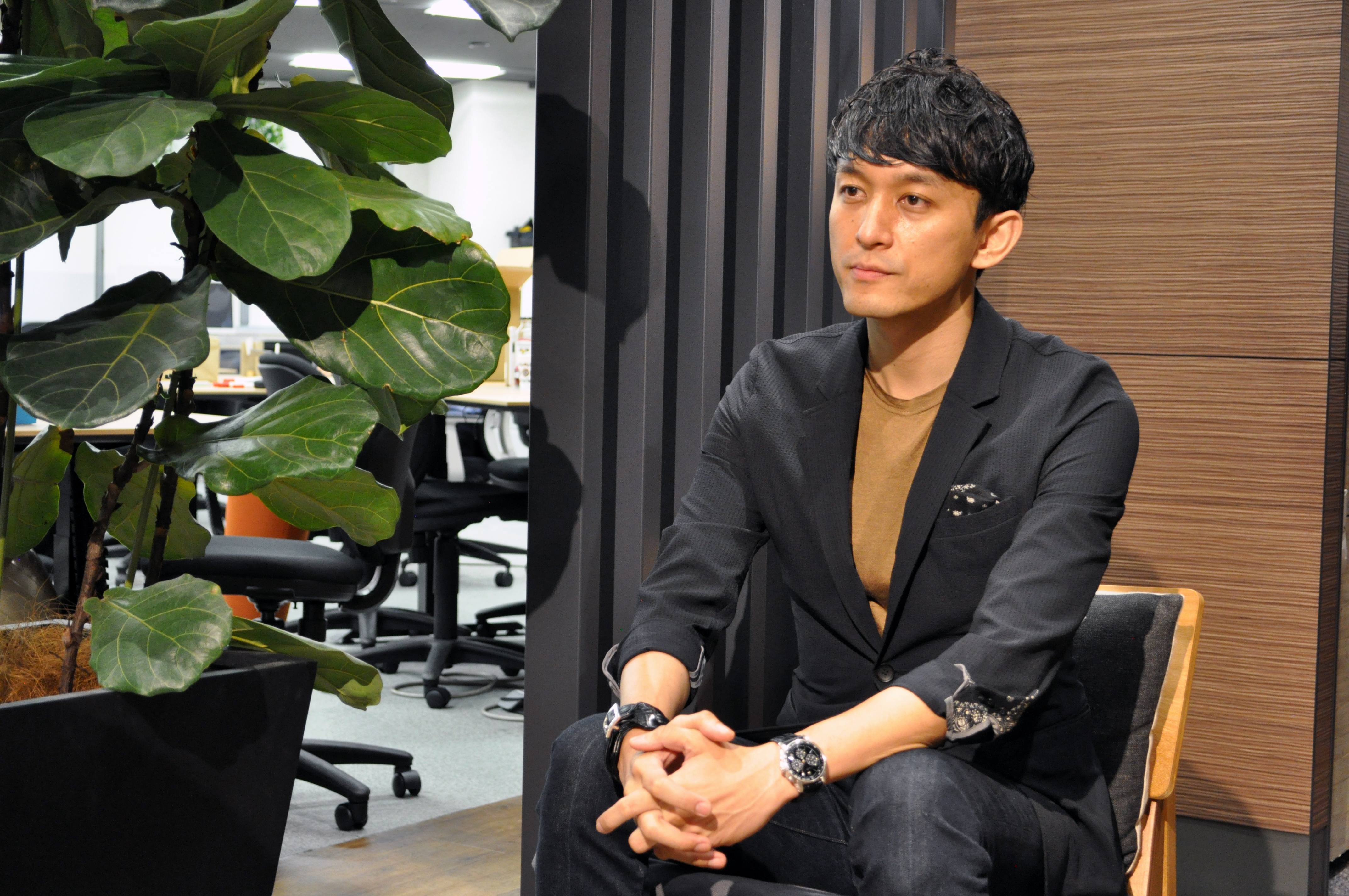 I was introduced by Mr. Hamano of Trois-re Inc., another educational company that’s also a GVH#5 member.

I originally started my business in Osaka’s Sakai City, so when I wanted to seriously start turning it into a franchise, I heard about GVH#5 as I was planning my move into Osaka City, and I joined. I joined in the spring of 2016.

Q: What made you decide to franchise?

In the beginning I wasn’t considering franchising at all. Participating in a startup acceleration program and joining GVH#5 were both big factors.

When I first created the after-school program, the idea was to put all my efforts into creating my ideal educational system. But in 2015, I participated in an Osaka Prefecture startup support program called Booming!, and I met a number of people there, and my thinking changed.
Since I have this education system that I think is good, shouldn’t I try to share it with more children? Was the question I started asking myself, and I decided I wanted to give it a go.

After joining GVH#5, I was introduced to many support organizations, and received funding, so there was a big change in the speed of our growth. After I joined in 2016, in November 2019, we exited by having EDION buy out our project, so we’ve made huge strides in the past 3 or 4 years.

Once I joined GVH#5, I really felt the importance of expanding relationships and the scope of your movements. How being able to remove your cap and see if the sky is the limit is an important factor in your growth.

There are many here who are raising funds, and there are so many things I didn’t know about back then. I’ve been able to learn a lot by experiencing this inspiring community first-hand.

I was also able to find people I can bounce ideas off of. It’s sometimes difficult for managers to make business connections at the same managerial level, so that may have been one of the most valuable things for me.
I have good rivals with the same amount of ambition, and I think I’ve made some good partnerships.

Q: What kind of benefits do you feel the Umeda, Osaka area offers?

I think Umeda, Osaka is an extremely advantageous area.

We’re told that people, things, money, and information are important in the management of a company, but if we first look at people, Umeda is an advantageous hiring location. Sakai City, where I founded my company, for instance, is a bedroom community, so there are many people that commute from Sakai City to downtown Osaka, but I don’t really think of Sakai City as a place to work. Job seekers also tend to look for work in central cities like Osaka, so the number and quality of candidates you’ll meet will be different.

There are more opportunities for appointments, too. Now that I’m in Umeda, the number of clients that come to see me has increased, and I’m much closer to my clients when I go to visit them. Things have become much more efficient with less travel. 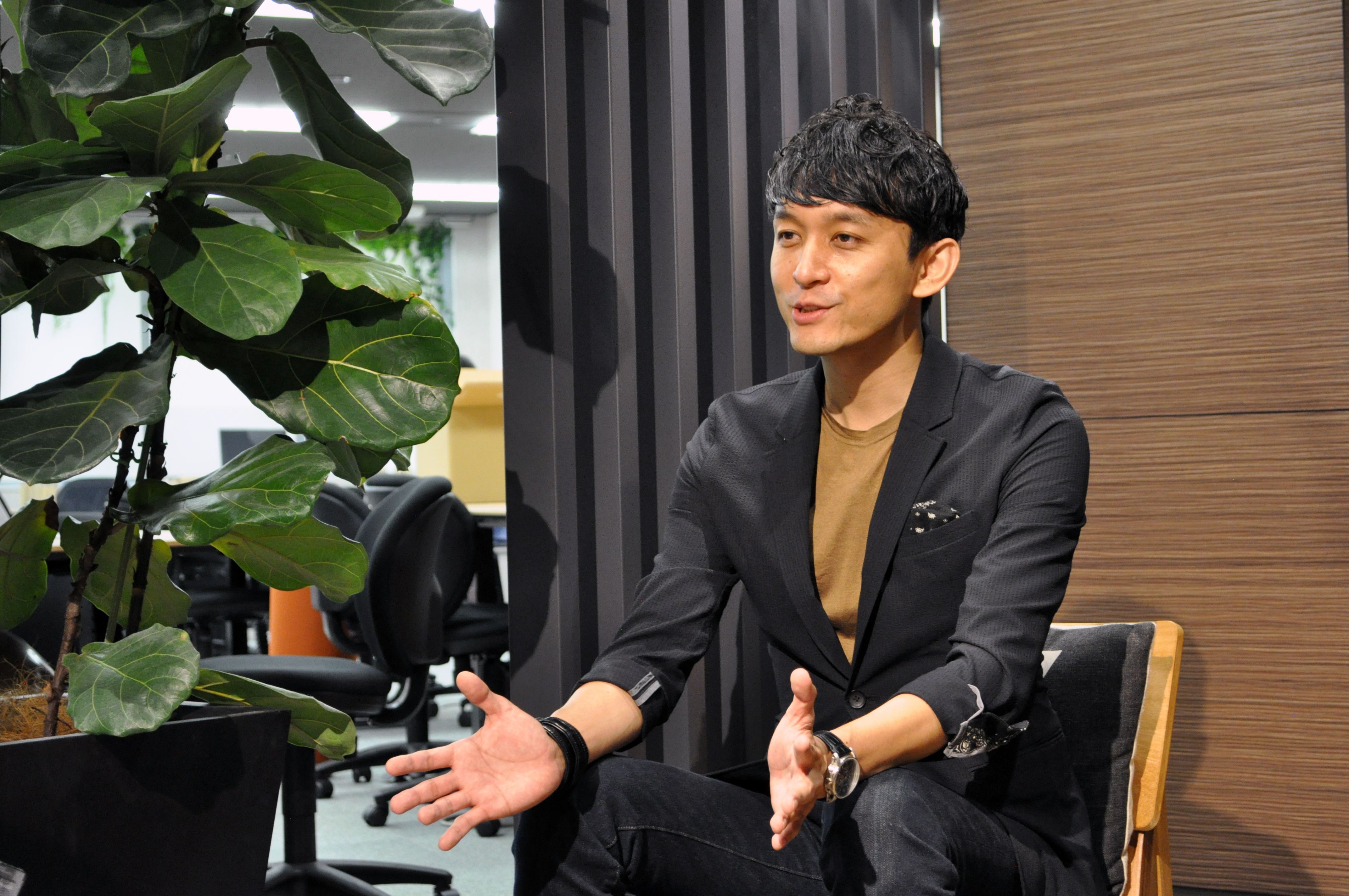 Q: What elements of GVH#5’s support were you most glad to have used? What would you recommend to other members?

We also held an M&A press conference here. There was a lot of press, but I felt zero stress because they handled the situation very well.

I’ve never directly made a request myself, but business matching is another of GVH#5’s strengths, and I think it’d be something good for prospective members to consider.

Q: What do you hope to see from GVH#5 in the future?

I was a member of GVH#5 until November 2019, but I’ll be acting as a supporter from now on, so I’ll respond from that perspective.

I’ve gained a lot of knowledge from my experience at GVH#5, so I’d like to give back by returning some of that knowledge to GVH#5 members.
There are CEOs who’ve made IPOs, but there are still very few examples of companies exiting with an M&S of over 1 million yen in Kansai, so I think there’s a need for support for the younger generations and individual funding.
We’re hoping that Hankyu Hanshin Group, which operates GVH#5, and Osaka Prefecture’s plan to build this startup ecosystem will help by providing a precedent.
I’m still serving as Youmemiru’s CEO, but in addition to my work with EDION, I’d like to keep making education in younger generations my life’s work.

Specifically, I would like to provide businesses with partners with whom to share ideas, exit strategies, alliances with large corporations, mentoring, and that sort of thing.

Q: Finally, could you please share a message for up-and-coming startups, and those considering signing up to become GVH#5 members?

Speaking of the positives, GVH#5 is truly a comfortable environment to be in. For members looking to grow, when they look back on their time here, I think they’ll easily be able to say it was a good experience.
On the other hand, if I look for a negative, it’s that everyone is so kind and the location is so good that there’s a danger you might just become too comfortable.

If you’re truly looking to grow, then I welcome you to come knock on our door. Also, I’d encourage members to work hard, and if you’ve decided you’ve grown enough, offer your seat to the next person when you reach that point.
There is a screening process for entry, but I think what you do once you’ve joined GVH#5 is much more important than before joining. We’re looking for people who can earnestly apply themselves to their projects. I think that this is really the best possible environment for the dedicated, so please consider joining, and challenging yourself. 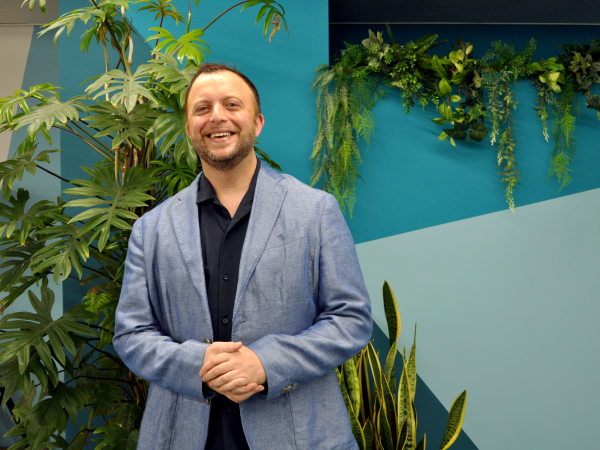 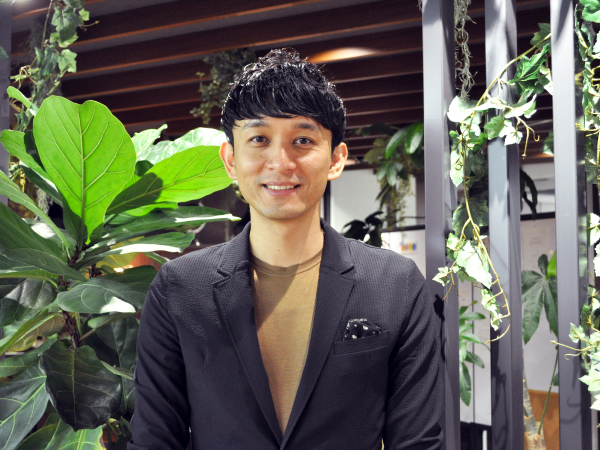 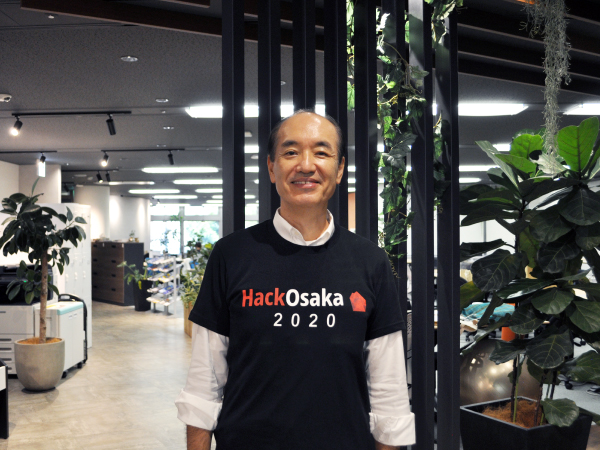 GVH#5 has produced many budding businesses that have achieved great success, receiving business awards and exiting. We interviewed some of GVH#5's distinguished alumni entrepreneurs, supporters, and people involved with GVH#5 about what drives them.